I recently took a few month break from playing The Division in an attempt to give Massive a chance to fix some of the major issues I was having with the game. The latest patch, or update, that I had played was The Underground DLC and I played for roughly 3 days before signing off for a while. While The Underground DLC was playable and introduced some new changes to gameplay, it still didn’t contain enough changes and content to keep me around for the time. And so, my 3 month hiatus began.

Now, 3 months later, I’ve returned to the streets of Manhattan. The latest patches, specifically 1.4 and 1.5, have fixed a lot of the looting issues I had. They also covered issues I had with gearing, mostly that it took several hours of gameplay to advance a few GS levels. I mostly play solo, as I have no friends that even wanted to attempt to play after the game’s disastrous launch and first few patches. Even with the in-game matchmaking system, I struggled to advance my GS to any level near the top. Hours of grinding and fighting, avoiding the Dark Zone like the plague, and ultimately getting nowhere.

However, since the the newest patches have hit, in a fraction of the time I have actually maxed out my G at 256. I haven’t done any min/max work yet, but I’ve started to fill out my collection of weapon and gear mods. I only keep certain items, and still have several blues in my inventory at the moment.

Screenshot of my current character: 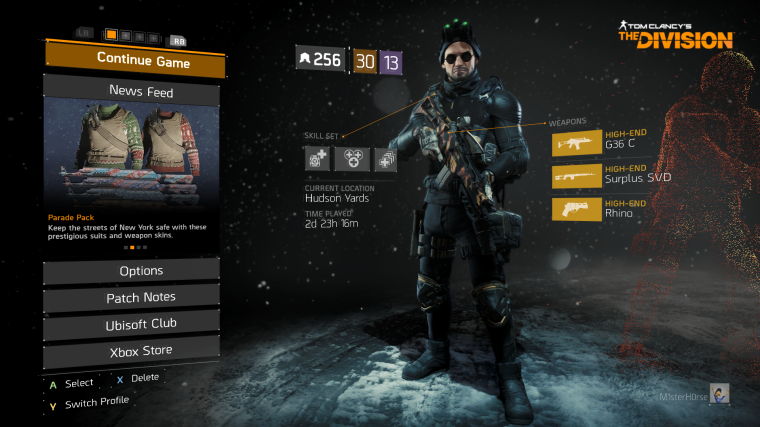 For starters, you have the new World Tier system. Once you’ve reached level 30, you will be able to select a World Tier. Each World Tier has different level enemies that drop increasingly more powerful rewards and loot. This patch added 4 tiers to the game world, which changed it as follows:

Also introduced to the world, were the new Field Proficiency caches that drop loot depending on the selected World Tier. This enabled players to continue to gain experience by completing missions and killing enemies, and rewarded them for continued completions.

I won’t go into the full patch notes, but I’ll list the global changes that were made.

World Tier 5 was added in this patch.

Various changes to gameplay were made, but not to the extent that Patch 1.4 made. Most notable was the change made to Enemy Armor Damage stat. It was changed from being a minor bonus, to a major bonus.

Looking at the changes that were made for each patch and how far the game has come in the resulting changes, I’m fairly impressed with how much the game has changed in the past few months. Given that I just started playing again, I actually enjoy playing the game in its current state. While we wait for 1.6 to drop, the game is at least stable in the PvE world, as well as rewarding. You don’t have to grind forever to get higher GS items, but it’s challenging enough that you enjoy the gameplay.

Pick the game back up and try it out if you haven’t yet. I’ve only just started, but it’s been some awesome steps in the right direction with the game. The only complaints I have right now: the Dark Zone isn’t for me. Give me some new content to play through, and I’ll be happy.